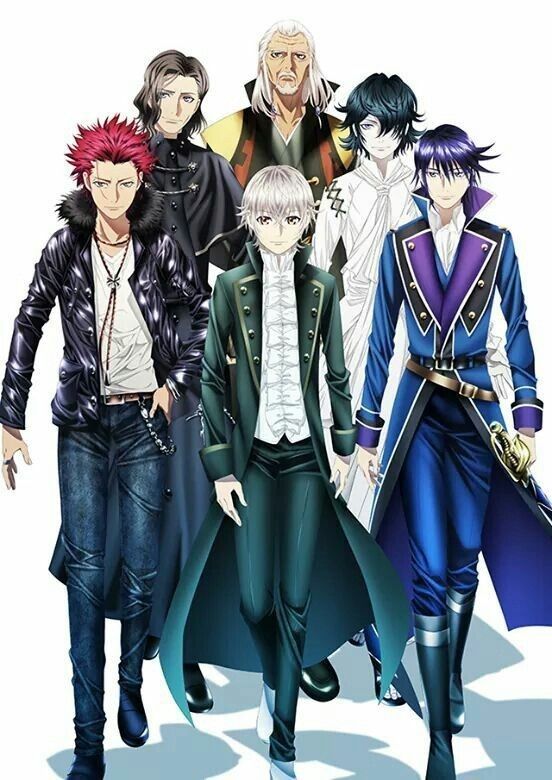 When most people think of K Project, they think of it’s flashy style and hot dudes. While there is no doubt there is a heavy focus on these elements, there is more to K than just that. K project is actually pretty interesting behind its overbearing style. In this post I will be discussing all of the kings as they relate to one of the major themes of the anime.

WARNING! There will be spoilers for K Project.

WHAT IS THE SWORD OF DAMOCLES?

In K, each king as a Sword of Damocles that appears in the sky whenever they use their powers. The Sword of Damocles is a reference to Greek Mythology. Damocles was a courtier to the king Dionysius. He felt the king was fortunate to have power and authority. Dionysius offered to switch places for a day, and hung a sword above the throne by a single thread to represent what it feels like to be king. This caused Damocles to beg to switch back, realizing with great power also comes great danger.

The Sword of Damocles in K represents the burdens faced by those in power. A king is burdened with many tasks and has many enemies. At any point, these burdens can be too much and end in death. That fear is represented by the sword, which can fall at any time. When a king uses too much of their power, and raises their Weismann level, the sword will fall and cause massive death and destruction. The goal of this post is to explain the burdens each king faces that may lead to their downfall, represented by the Sword of Damocles. 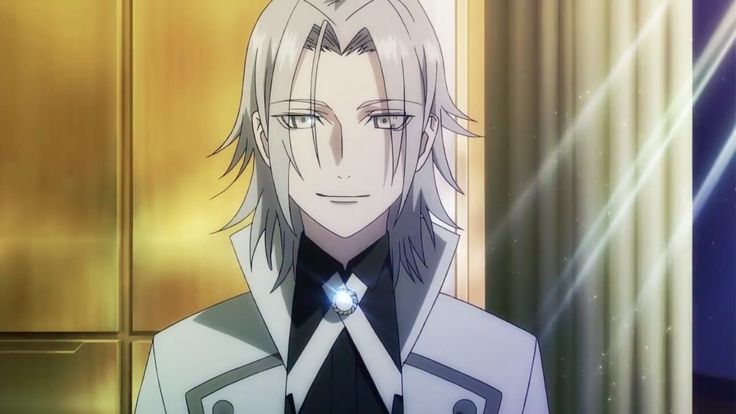 The burden of Adolph K. Weismann is the burden of immortality. The reason this is a burden is because of everything he has to face by being alive. The image of his sister dying haunt him so much, he locked himself away in his blimp. He also has to live with what his research has brought to the world. While there are many benefits to the power of the Dresden Slate, his fear of this power being used destructively also came true. He bears the burden of all of the other kings that came after him.

At the end of the anime, she raises his Weismann level to the maximum to intentionally cause his sword to fall on the Dresden Slate, removing psychic powers from the world. This represents him relieving the burdens of all the other kings, who no longer have to bear the burdens that came with their power. And by doing so, he relieved his own burden of immortality. 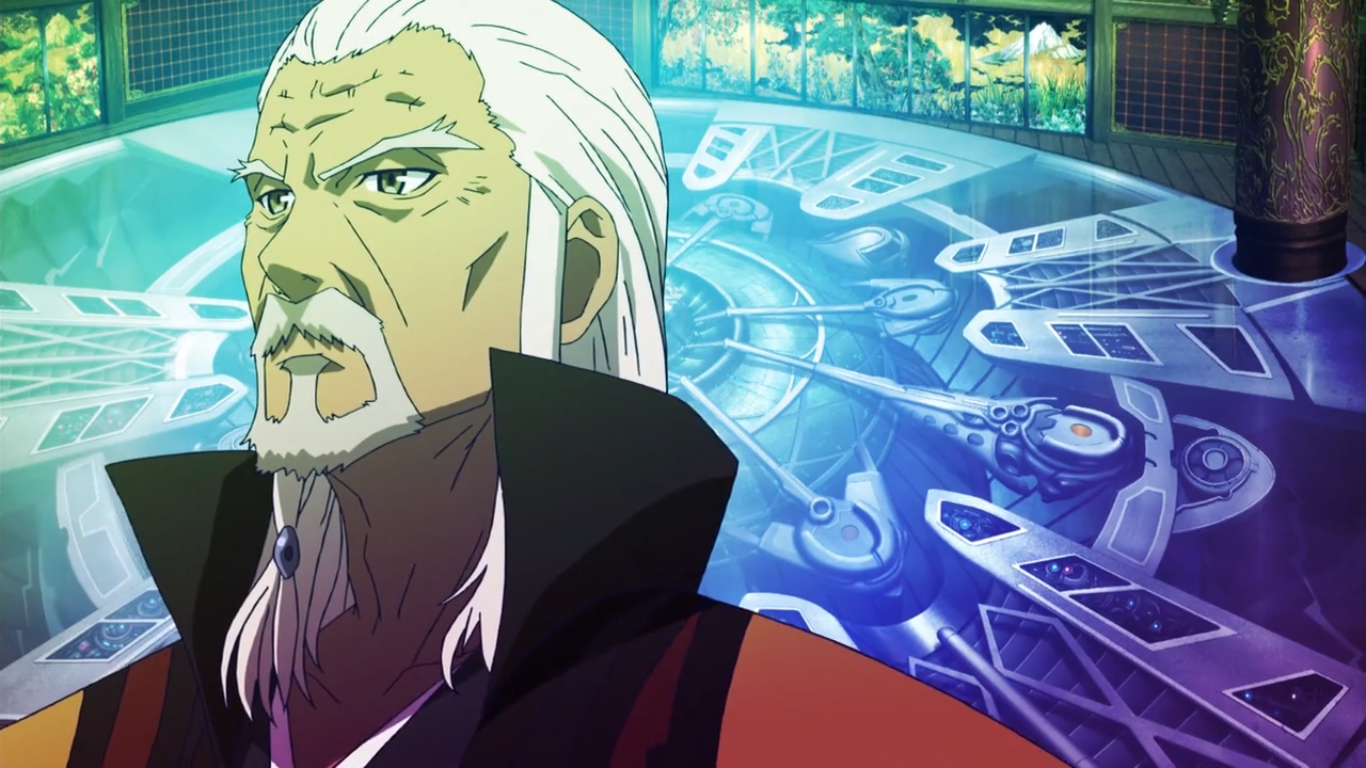 The burden of Daikaku Kokujoji is the burden of responsibility. He is responsible for looking over the Dresden Slate, which provides the kings and their members with their powers. He needs to make sure the slate isn’t used without restraint. He also has responsibility for the whole country. The country has evolved as much as it has due to the Dresden Slate, and he needs to make sure the country is still on the correct path. He also feels responsible to carry on the wishes of Adolph K. Weismann, who wished the powers would be used to make the world a better place.

The burden of Mikoto Suoh is the burden of leadership. In my opinion, he is the most interesting king. He never felt like he was worthy of being a king. As a king, he was reckless and committed many acts of violence, which raised his Weismann level dangerously high. He didn’t really try to lead the clan, so he let HOMRA do as they please.  He wasn’t a true leader, nor a true king. Despite this, his clansmen followed without question.

After Tatara Totsuka died, he took it upon himself to take revenge. If he ends up getting revenge, his Weismann level would max out and cause a Damocles Down, causing massive destruction. Mikoto didn’t care about the consequences. He main motivation for revenge was so he could play his role as a king for the first time in his life. Being a leader and getting revenge was all he wanted after Tatara’s death, not even caring if this was the last thing he achieved in his life. His true last goal was for him to finally be their real king.

After his death, the clan fell apart. Shortly afterwards, Anna became the next red king and had to carry on the burden of leadership. They needed a strong leader to bring HOMRA back together and to fight against the upcoming threat of JUNGLE. 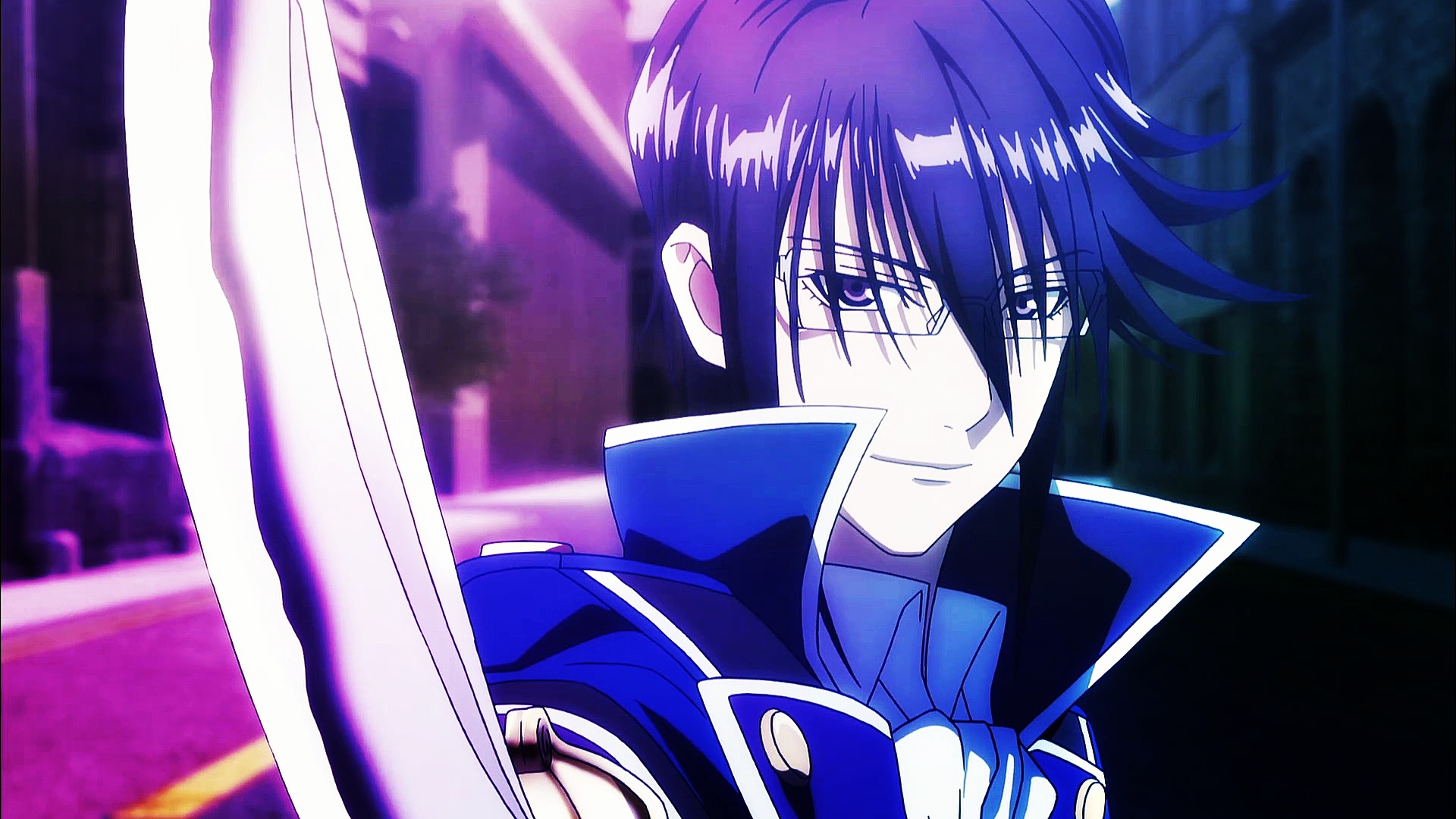 The burden of Reisi Munakata is the burden of order. He is the leader of Scepter 4, tasked with keeping order in the city. They act somewhat like law enforcement, but they also have a huge task to keep order when it comes to psychic abilities. The burden of order causes him to lock up Mikoto, who he considers a friend, to prevent his Weismann level from getting too high and causing a Damocles Down.

He ends up having to kill Mikoto to prevent his Sword of Damocles from causing massive destruction. This causes his own Weismann level to get dangerously high as killing a king for the sake of order is a heavy burden for a king. He also takes on the protection of the Dresden Slate after the death of the Gold King to prevent Nagare Hisui from using it to cause mass disorder across the world.

The burden of Nagare Hisui is the burden of weakness. He carries the burden of the weak who are unable to protect themselves, just as he was before he became king. During the Kagutsu Crater incident, he was supposed to die as his heart had been destroyed, but the power of the green king kept him alive. He thought if everyone had such a power, then everyone would be on an even playing field , and would have the ability to defend themselves. From his perspective, he was fighting for the weak, to give them a way to protect themselves from danger. 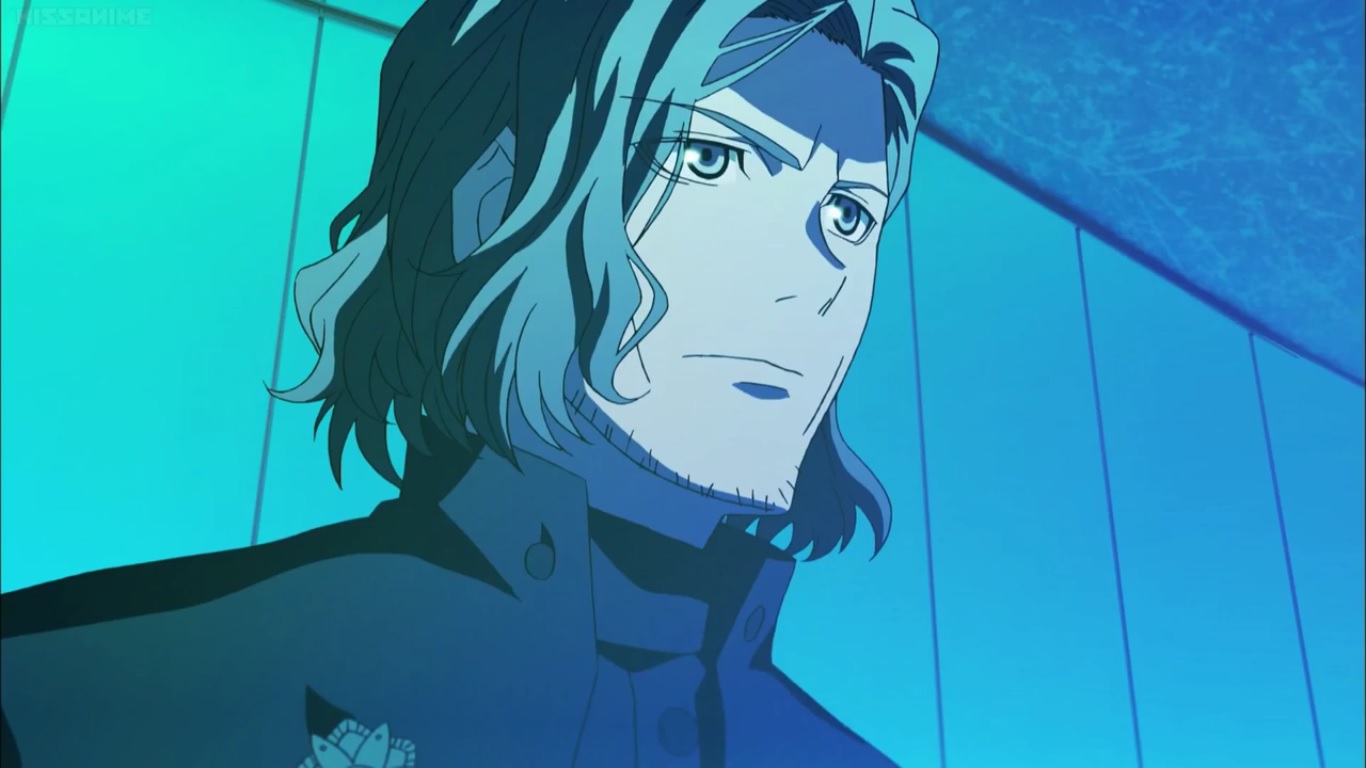 The burden of Tenkei Iwafune is the burden of regret. He is burdened by the regret of failing to protect his clan during the Kagutsu Crater incident, leading to all of Cathedral dying except him. He tries to make up for this by helping Nagare. The best way to prevent more people from dying is to make sure everyone has the ability to protect themselves, and not having to rely on the power given to them by a king, as he wasn’t able to save his own clan.

He also looks after Nagare like a father. Perhaps he feels sympathy for him as another victim of the terrifying power of kings. Seeing that he was saved by the power of the green king, it gave him hope he could prevent another tragedy by passing on this power to everyone, He doesn’t like the power of kings, as he couldn’t save his own people with his powers as a king, but if everyone had power, there would be no need for kings. Under this system, no other king would ever have to feel the regret of failing to save their own clan.

The burden of the colorless king is the burden of fear. His power as a king is to take over bodies. He does not know how to deal with his power, nor lead a clan, which kicks in his sense of fear. The only way to overcome this fear is to gain a sense of power over others. This causes him to try to eliminate all of the other kings so he can be the only one. If he is the only king, he is the only one with power, and would have nothing to fear.

But his many murders cause him to gain many enemies, and he had to rely on his powers to take over even more bodies; so many to the point where he lost a sense of his own identity, since all of the identities of the bodies he took over were mixed into one. His fearful personality also makes him act with cowardice in situations of great danger. If he doesn’t feel like he is in control of the situation, he only course of action is to retreat out of fear. 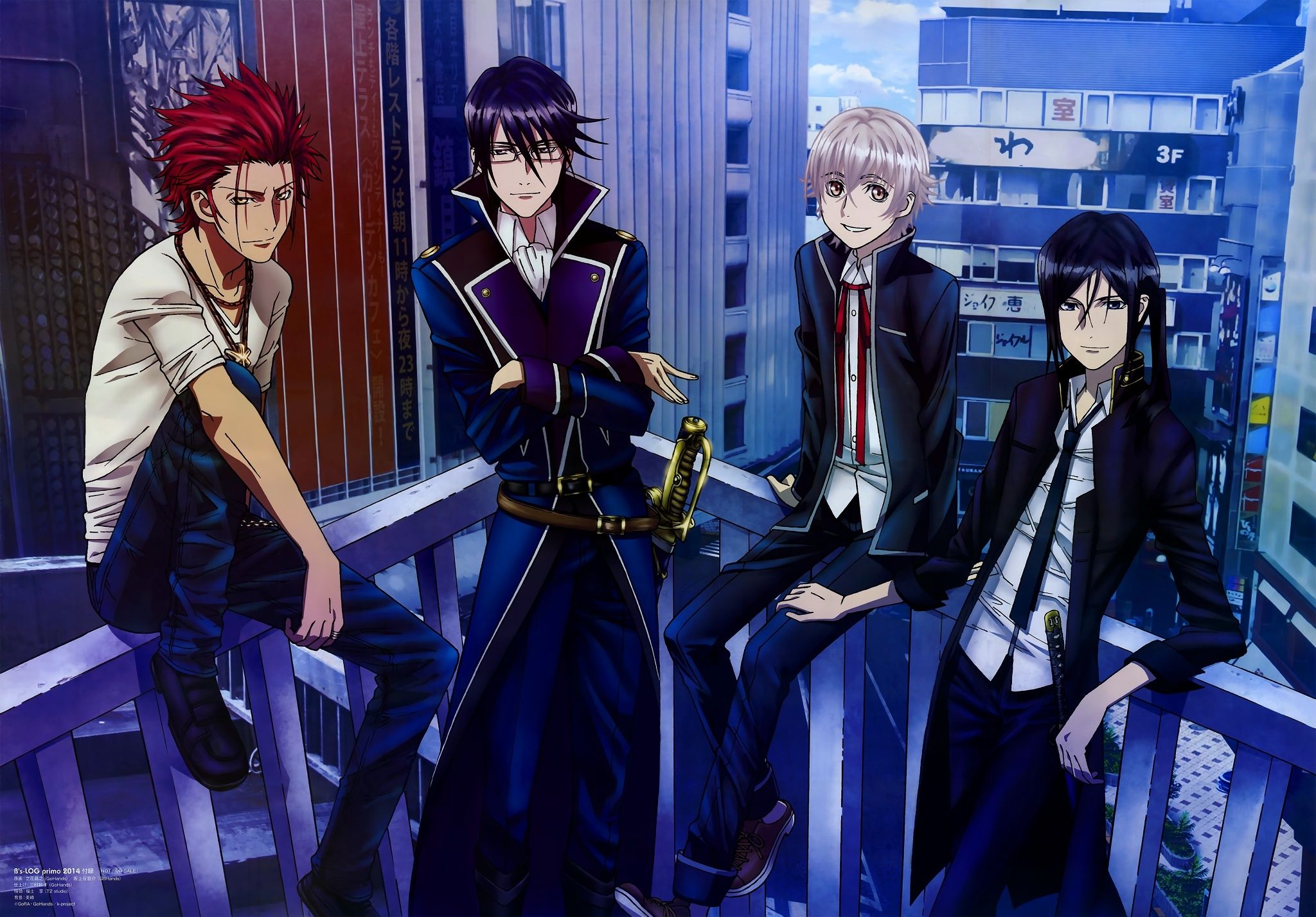 Well that is all 7 kings, for all 7 colors. I find it cool that K not only incorporates Greek Mythology into its story, but also into its main themes. When looked at it this way, all of the kings become much more interesting. Beyond all the flashy action sequences and hot dudes, this is why I enjoy K Project. And I hope better understanding the show makes you enjoy it and appreciate it more too.

That’s all for this post. Back to my burdens, the burden of real life responsibilities.