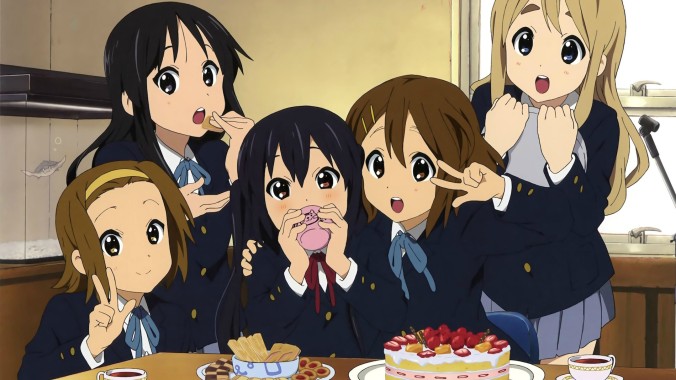 Recently, I finished the anime K-On! I have heard for quite a long time that it is a great slice of life anime with some of the best executed moe in anime. And I have to agree, I enjoyed this anime way more than I thought I would. The anime really is simple. It’s about a light music club that plays music sometimes, eats snacks, and drinks tea. The drama isn’t too serious and it’s mostly lighthearted fun. A good reason why this anime was so enjoyable was its endearing cast of characters. The main cast of K-On! meshes very well together and they have their own unique qualities that make them very enjoyable characters. So in this short top list, I will be ranking the main characters of K-On! By main characters, I mean the 5 girls in the light music club.

WARNING! There will be some spoilers! 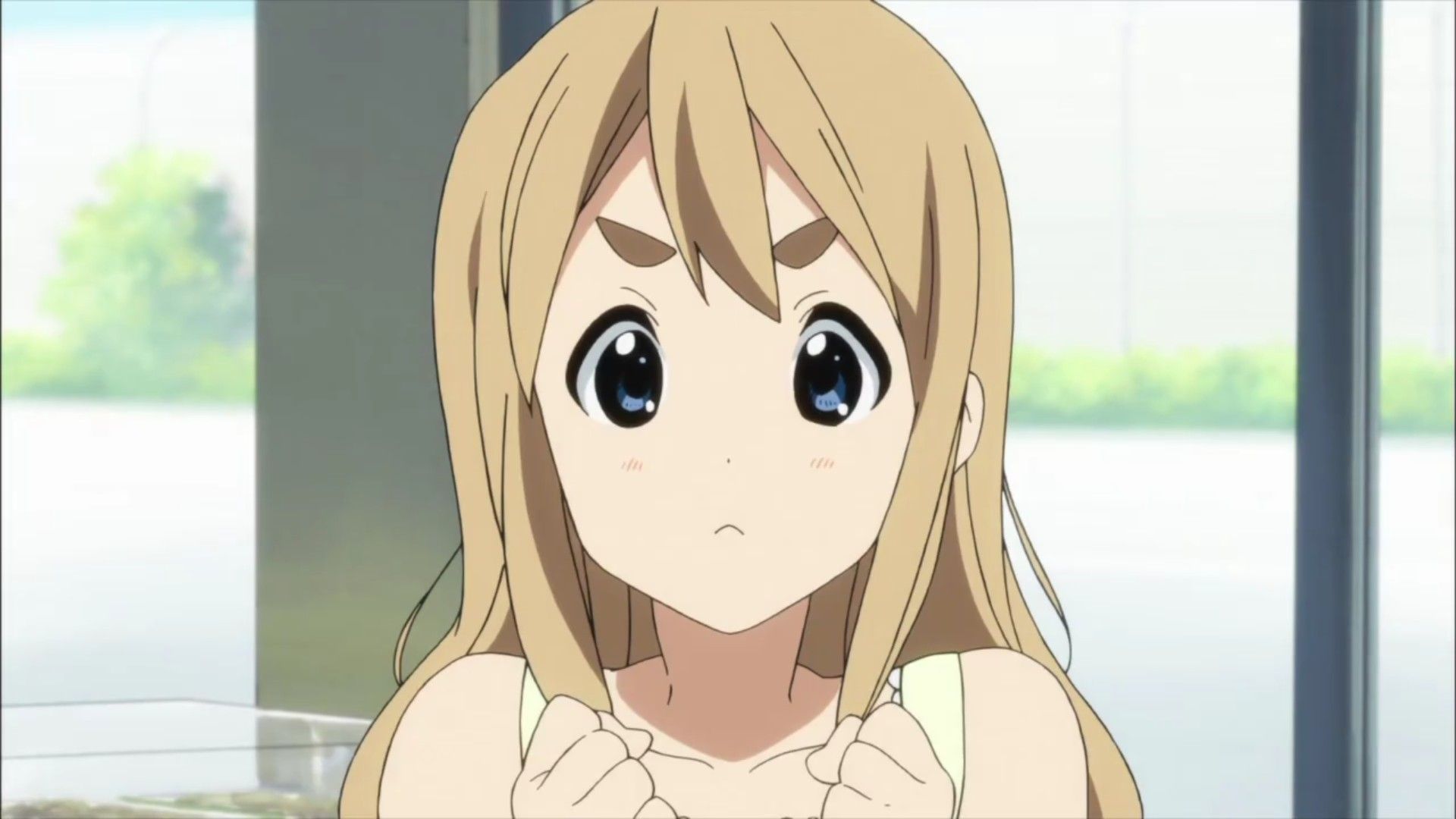 But that is all she does. Otherwise, she is just your average, typical rich girl who is pretty. She isn’t funny or endearing like everyone else. And it seems the show gives her the least amount of focus. The only episode that really focused on her was an episode about her wanting to get hit by her friends. What a weirdo. 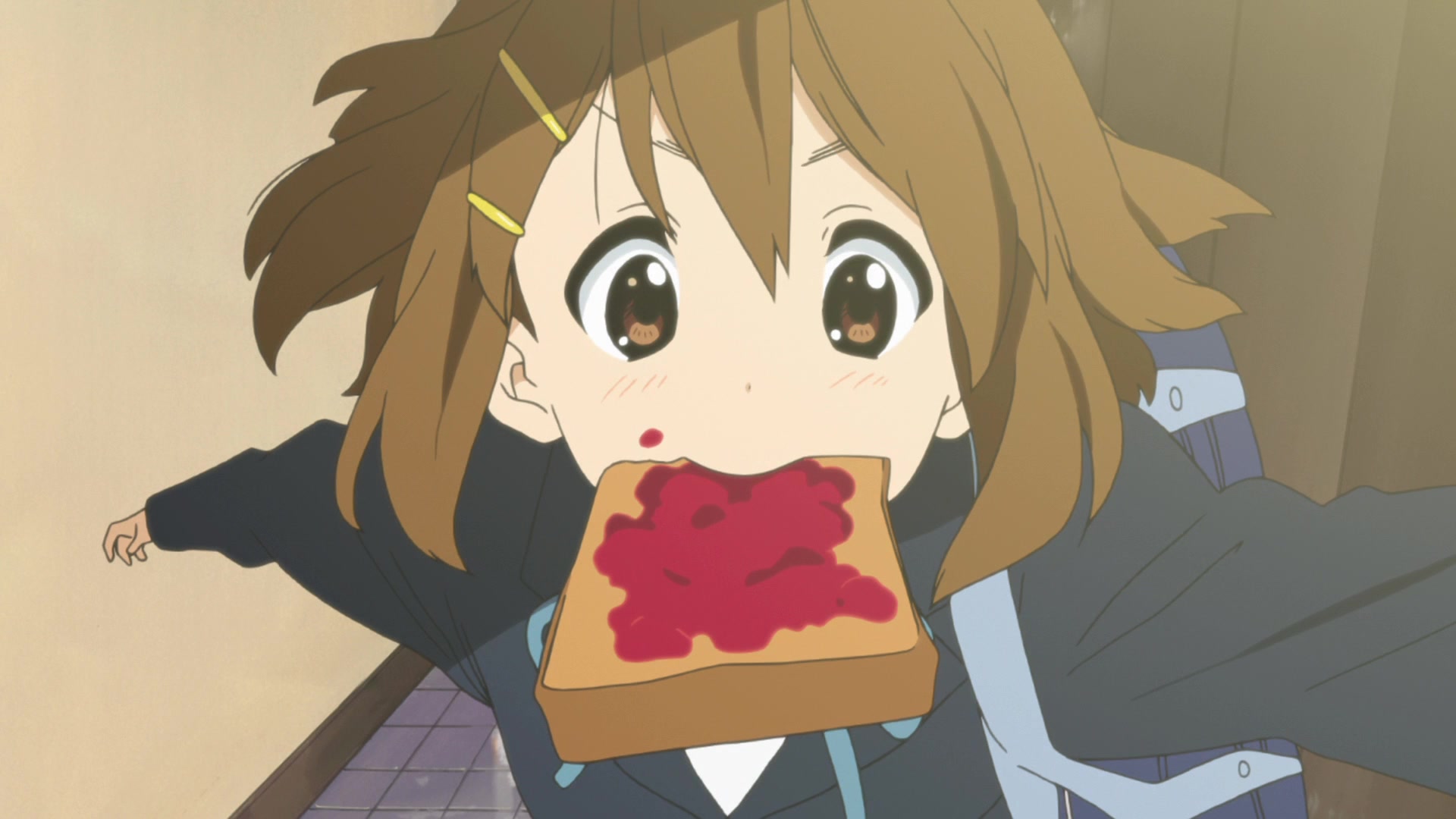 Up next we have the first character I really like. It’s the guitar player Yui. Why do I like Yui? Simple. She is such a dumbass, that she ends up being absolutely hilarious. She is a complete airhead. Once she memorizes one thing, she forgets everything else. She constantly makes mistakes and makes stupid decisions that are bound to have you yelling at the screen. And she only really gets motivated with food.

She isn’t even that good at guitar. When focusing on a task that isn’t her guitar, she forgets how to play. She is atrocious at her studies and gets distracted super easily. She treats her guitar like a real person, giving it a name and dressing it up sometimes. At one point, she forget the lyrics to the song as she was supposed to sing it on stage. Another time she had to leave the house to buy soy sauce. She sang a song about soy sauce on the way out outside the house and when the old lady asked if she was on an errand, she responded they were out of sugar. And when she was trying to trim her bangs, I knew she would screw up and of course she did. And she didn’t even know London was a city in England, which is a country in Europe.

But I forgive Yui. It’s easy to forgive her for three main reasons. She is such a dumbass that is provides much of the show’s comedy. And this anime is absolutely hilarious. But also she can be totally adorable at times. Sometimes I just wanna give her a hug. It’s kinda like that feeling you get around babies, which is fitting considering she has the intelligence of one. And that cuteness is amplified by her amazing English voice performance from Stephanie Sheh. Also, she is really sweet. She may be dumb but she really cares about her friends and always considers them, even if her ideas are extremely stupid. 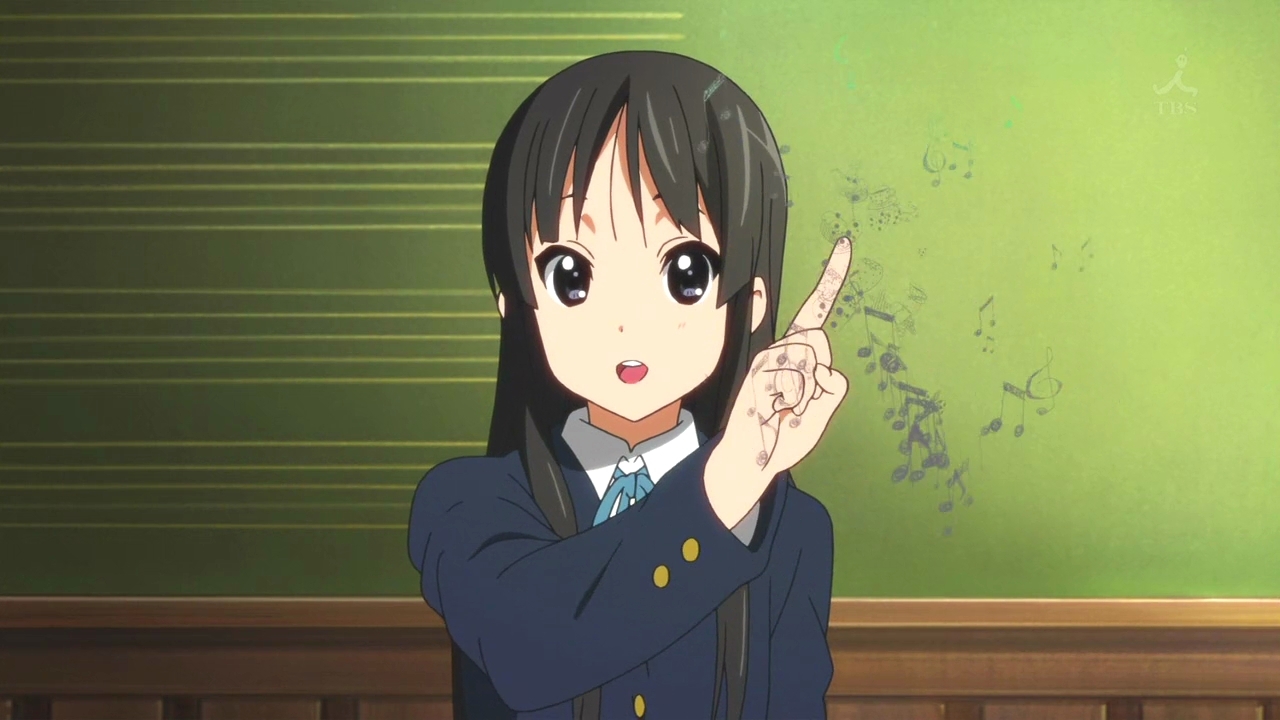 Up next is Mio, the smart and mature girl of the group. Despite seeming like she has it all together, she is actually very shy and gets embarrassed easily. She also gets scared very easily. Despite all this, she gets extremely popular. After tripping on stage and revealing her underwear to the school, she got her own fan club.

What I really like about her is how adorable she is when embarrassed on scared. Ritsu is always bullying her causing her to to freak out all the time or hit Ritsu. But she is so adorable that I can’t help but wanting Ritsu to keep doing it. For the longest time, I’ve never really been a fan of bullying, but after seeing Mio getting bullied all the time, I actually highly encourage it.

Also, as a musician, she is much more competent than the rest. She is a much better singer than Yui. The ed themes always have her singing them and the ed themes are way better than the op themes. And when Yui, like a dumbass, forgot the lyrics, Mio stepped in and saved the day. They honestly should have just had her sing all the songs. It would be hilarious to see her get embarrassed on stage more often. I also have to give credit to her English voice actress, Cristina Vee, for making her even more adorable. 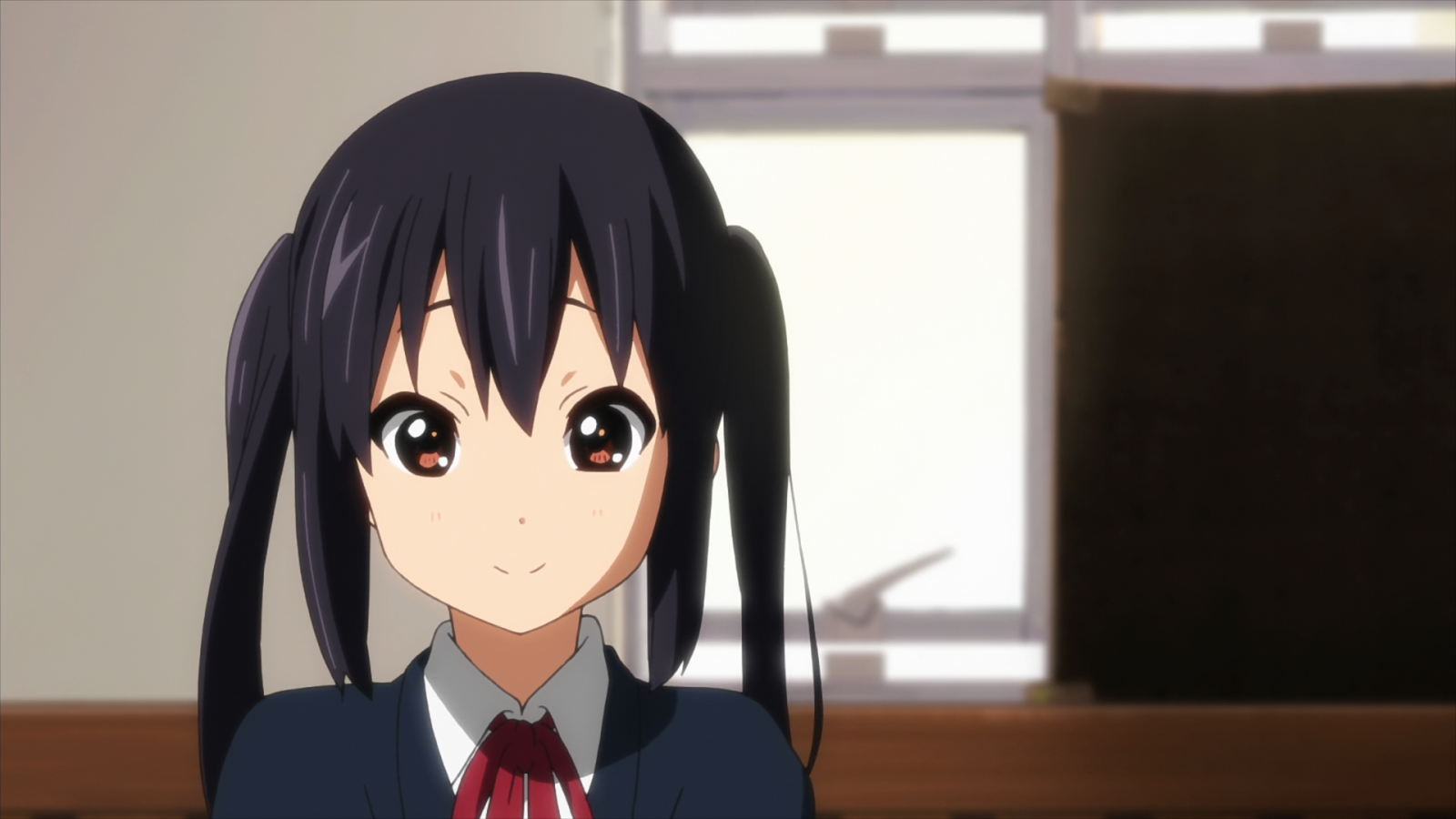 After season 1, she was actually number 4 on my list. At the time, Azusa didn’t really seem all that special to me. But after finishing season 2 and the movie, I began to appreciate her a lot more. She is arguably the protagonist of the second season, as most of the events of season 2 revolve around her. About half of the season was about doing something nice for Azusa as she is the underclassman of the rest of the club, and they would move onto college without her.

When she first joins the club, she usually got mad at the club for being so lazy and incompetent. But over time, she begins to become really attached to them and they become her most treasured friends. The heavy focus on Azusa in the second season really allowed you to feel her emotions. She tried to forget about the fact that her fun times with the club will end and even tried to rationalize it, thinking they will just move on and forget about her, so there is no reason to really care.

There are many times in which the seniors are doing something that doesn’t involve Azusa, and she usually pretends she doesn’t care, but you can tell she feels left out and doesn’t want to be left behind.

The whole time, she was prepared to say goodbye to her friends, but by the end of the anime, reality starts to kick in and you can truly feel how much she really cared about the light music club. She just breaks down crying, hoping it won’t end, and it was by far the most emotional scene in the whole anime.

Azusa also has some really endearing traits. She always acts to serious most of the time, but being with the club allowed her to relax a bit more (although she still calls them out on their laziness). While she tries to pretend she is super serious and doesn’t care about distractions, she kinda likes cute things, and even gets used to her nickname Azunyan, which is honestly really adorable. And I really have to give credit to her voice actress, Christine Marie Cabanos, especially for those emotional scenes.

Damn, I didn’t mean to get serious on this one. Damn it, back to shit posting. 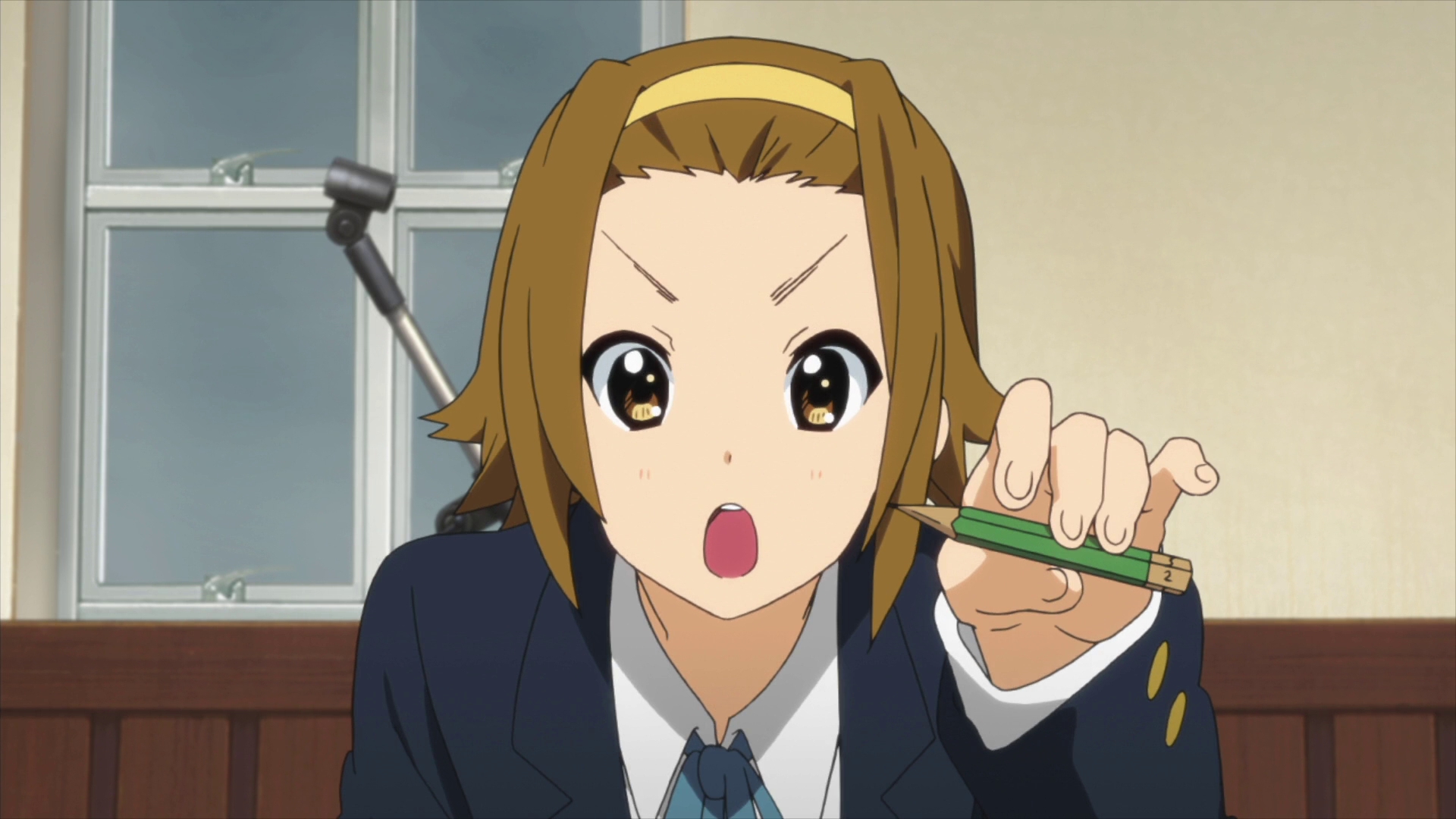 Why is Ritsu number 1? Well it’s pretty simple. Tomboys are always number 1. Tomboy characters will always be the best no matter what and Ritsu is the tomboy of the show. And have you seen her fashion sense? Her tomboy fashion sense is legendary.

She is easily the loudest and most energetic of the group. She was the one that pushed for the light music club to be formed. She also has a forehead that would put Iori from Idolmaster to shame.

Because she is so energetic, she can be pretty funny with her antics. She is always coming up with ideas and trying to get the club to do things. She also bullies Mio, her childhood friend, all the time. This is absolutely hilarious because Mio is so adorable when bullied. It also ends with her getting hit by Mio, which is hilarious. She definitely deserves it though.

She is definitely the most genki of the group, and her English voice actress Cassandra Lee Morris gets down this trait and her tomboyishness down perfectly and was definitely my favorite voice performance in the show. Her wild and energetic nature also makes her the perfect person to play the drums. She even randomly starts drumming when she gets bored.

So yeah, tomboys are awesome, cool, and fun. So it was no surprise Ritsu was my favorite. If I’m being honest, this was set in stone before I even started the anime. So the moral of the story is, tomboys are the best. So that is my K-On! main cast rankings. Don’t take it too seriously. Everyone is cute in their own way, but tomboys will always reign supreme. This is a great anime with a great cast of characters so I’m sure people will find something to love in at least one of these characters.

Just remember, tomboys are the best, London is a city in England, and we are all out of SOY SAUCE.